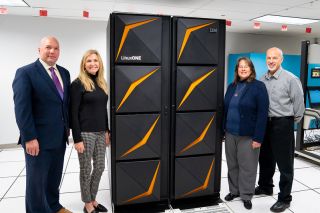 IBM LinuxONE III, a secured enterprise platform for mission-critical applications and sensitive data for hybrid cloud, was installed at Marist College in late October—the first installation of the platform anywhere since it was announced in September.

With cloud native development, performance, and industry-first privacy capabilities, a single LinuxONE III system can execute up to one trillion web transactions. [1] As a result, both Marist students and developers around the world now have access to the same industry-leading enterprise technology used by two-thirds of the Fortune 100[2].

Furthermore, LinuxONE III provides an innovative response to one of the biggest issues in cloud computing: security. Although cloud technology brings much convenience, flexibility, and expanded capabilities for companies, only 20 percent of workloads have reportedly been moved to the cloud. Why? Protecting intellectual property—such as data—is paramount and the use of hybrid cloud services necessitates greater security.

Additionally, LinuxONE is helping Marist close the information technology (IT) skills gap in the workplace by providing widespread access to LinuxONE via a virtual computer lab environment. With this opportunity, Marist students can experience a different computing architecture and increase their overall programming experience. LinuxONE provides:

In addition to Marist College students, developers worldwide will also benefit. The LinuxONE III will power the LinuxONE Community Cloud, which provides free and open access to an enterprise-grade Linux environment. “Having such leading technology housed at Marist is an incredible opportunity, both for our students and for the larger community of developers. It speaks to our institutional focus on cloud computing and, notably, on cybersecurity—a major issue for all industries,” said Roger Norton, Dean of Marist’s School of Computer Science and Mathematics. “The LinuxONE III includes both system access and tutorials to help users get started and build critical IT skills needed in the current—and future—job market.”

Marist, which has been named a “Most Innovative School” by U.S. News, has a long history of using cutting-edge technology. The College has been at the forefront of both enterprise and cloud computing education through its 30-year collaboration with IBM, the Marist/IBM Joint Study, which includes extensive collaborative research projects.

The LinuxONE Community Cloud now also has enhanced capabilities, notably a CI/CD trial that allows developers to deploy chain code from GitHub to an IBM Blockchain Platform (IBP). The trial is available for up to 30 days with a fully integrated blockchain network and hands on tutorials.