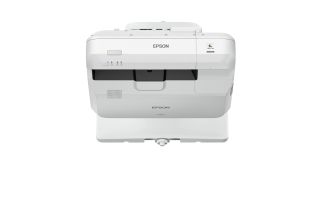 The Epson PowerLite 700U may be large and lack the cool interactive features of other short-throw projectors, but it is an imaging powerhouse capable of brightening up any lesson.

At 6.7- by 19.4- by 17.2-inches, the PL700U is a lot of projector; add in its feet and the projector sits 0.7-inches taller. It can be installed straight up on the floor or a table a couple inches from the screen or mounted on a wall. Underneath, it has four threaded mounting holes, three adjustable legs and Epson sells an economical $109 wall mounting kit that allows you to tweak its position to get the image just right. One thing is certain, this 25-pound projector will likely require two people to set up and adjust.

Rather than a conventional lamp, the PL700U’s illumination starts with a blue diode laser that’s rated to last 20,000 hours of use. With it you can say good-bye to changing projector lamps every other year. Inside, the projector has three WUXGA (1920 by 1200) polysilicon LCD panels whose images are combined and sent to the classroom’s screen.

Rated at 4,000-lumens the PL700U is among the brightest short-throw projectors available. The PL700U can create super-sharp images that are from 5.8- to nearly 11-feet (measured diagonally), making it a good choice from anything from a standard classroom to a mid-sized lecture hall; it can even be used to project digital scenery in the auditorium.

Regardless of how it’s set up, the PL700U can compensate for being installed at a horizontal or vertical angle of up to 3-degrees and Epson’s Quick Corner correction can create a perfectly rectangular image in a minute or two. Like other short-throw devices, this projector lacks an optical zoom, but it does have a 1.35X digital zoom.

With all the ports you’re likely to need in the classroom, the PL700U has a removable cable cover that makes everything look neater. There’re three HDMI inputs, one of which is MHL-ready for a phone or tablet, as well as connectors for VGA and composite video. There are three Type A USB 3.1 connectors, one of which is for Epson’s $100 Wi-Fi adapter, as well as a Type B port and a RS232 serial connection. The projector has audio-in and -out jacks and a built-in 16-watt speaker.

The PL700U includes several ways to adjust and control it, starting with its functional control panel. Its remote control can do anything from blanking the screen and audio and moving an on-screen pointer to changing inputs and Color Mode. It uses a pair of AA batteries and had a 30-foot range.

Regardless of whether you use the built-in wired Ethernet or the optional Wi-Fi module, the PL700U works with control systems from Crestron, AMX, Extron and PJLink. There’s also Epson’s iProjection app that is surprisingly easy to set up and use. Download the iOS or Android app and take control of the projector. In addition, to an on-screen remote control, the app can project Acrobat files, images, Web pages and even a live feed from the phone’s camera.

The projector worked well connected to an Apple Macbook Air, Acer Revo desktop and an HP X2 Chromebook as well as a Gefen 8X8 matrix video switcher. It was a fast starter, taking 5.6-seconds to put an image on-screen and 1.9-seconds to shut itself off. Happily, it can set up a split screen from two separate HDMI inputs.

On the test bench, the PL700U yielded a massive 4,980 lumens of light, 20 percent over its 4,000-lumen spec, putting it in the upper echelon of short-throw projectors. Its focus was pinpoint sharp and there’s a focusing lever next to the projector’s dust filter. The PL700U’s five Color Modes include the super bright Presentation and Dynamic modes as well as the more realistic sRGB and Cinema presets. It also has a Dicom Sim setting.

With all that hardware to cool, the PL700U has a massive fan and Epson recommends setting the projector up at least 20-inches away from walls to allow enough air in. The fan created 45.6 dBA of noise at 36-inches, much louder than other projectors and still its exhaust was a hot 122 degrees Fahrenheit.

When it’s running at full blast, the PL700U used 337 watts of power and 1.2-watts when it’s idle. Together, this adds up to $71 a year in electricity bills if your school pays the national average of 13 cents per kilowatt-hour. There are no lamps to replace but the 700U has a $43 dust filter that needs periodic replacing. Put it all together and the PL700U is economical to use at about $114 a year.

In the final analysis, the PL700U costs $2,290, but only $1,990 with Epson’s Brighter Futures educational discount. It should fit into any classroom by delivering bright, sharp and realistic images. A big bonus for schools is that the PL700U includes a three-year warranty and adding an extra year is only $99.

If you can deal with the absence of the interactive pen, the PowerLite 700U is an excellent choice for when image quality and brightness count for everything.