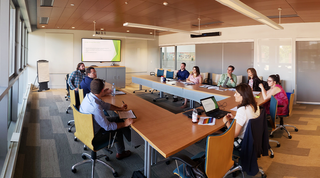 Dennis Baldwin is putting out fewer fires these days. He’s still fighting literal fires in his main job as a firefighter. But in his job as a technical assistant in the Center for Instructional Technology Expertise at Bristol Community College in Massachusetts, he’s putting out far fewer figurative fires—in the form of troubleshooting audio systems—thanks to the college’s purchase of five Nureva HDL300 audio conferencing systems.

“I used to spend significant time at the start of the day in classrooms making sure our traditional audio conferencing systems were up and running,” said Dennis. “But the HDL300 systems just work like you think they should. Ever since we installed them, I’ve never been back to those classrooms. So, I’ve gained hours and hours each week.”

Gaining time for Dennis and other IT team members to concentrate on higher value tasks is a nice bonus of their school’s HDL300 purchase, but the new audio conferencing systems are helping the college do something really amazing: improving students’ engagement in classes.

Audio conferencing is vital to Bristol’s use of distributed synchronous classes. This is an approach that allows students gathered in meeting rooms in Bristol’s four locations to attend the same class held by the same instructor by tuning in through audio and video conferencing. This allows the school to gain a critical mass of students for classes that might not attract enough students at a single location. The school can offer – and students can attend – more classes.

The effects of bad audio

But there was a problem. Students in remote classrooms were experiencing bad audio that made it difficult for them to engage with the instructor and participate in class discussions. And that can cause students to tune out.

So Bristol tried a range of solutions. A well-known mic/speaker/camera bar had decent pickup for the instructor. But, as Dennis explains, “When you had group collaboration where there were multiple people speaking at once, all the audio streams got truncated into one stream. Students in distant locations couldn’t hear properly so they couldn’t participate.”

Bristol tried a tabletop mic system next. Now side conversations overpowered the instructor’s voice, hampering conversations. The lapel mic solution they tried after was worst of all for allowing and inspiring classroom collaboration because only the instructor could be heard. Plus, there were usability issues and an ongoing hassle of replacing batteries.

Bristol’s AV supplier, Red Thread, then suggested a new solution: the Nureva HDL300 audio conferencing system. “We did a live online demo and immediately liked what we heard,” said Dennis. “The thing that impressed us most is that when you had multiple people in that same room – whether it was five people on our end and two people on Nureva’s end – we could actually talk to individual people simultaneously. And since the system is full duplex, there was no cutting in and cutting out. It’s almost like you’re there in a face-to-face environment.”

Bristol took steps to procure funding to order five HDL300 units for rooms ranging from 20' x 20' (6 x 6 m) to 20' x 40' (6 x 12 m) – most with a conventional boardroom configuration. Installation was easy and “very straightforward,” said Dennis. “But the beautiful thing we noticed was that no matter where you mount a unit – we tried a few different placements – it calibrates to the room. Anywhere you were, the audio sounded like you were perfectly in line with it.”

A “night and day” improvement

Feedback from instructors was excellent. “We’ve heard nothing but praise,” said Dennis. “It’s night and day. There’s no comparison between what we had before and what we have now.”

As for the students, Dennis got the best response he could hope for from them. None. “We didn’t get any more complaints, which to us is positive feedback. When the audio is working properly, people just don’t notice it. And that’s fine.”

This case study was cross-posted with Nureva's permission.

To learn more about this project and the HDL300 audio conferencing system, visit https://www.nureva.com/customer-stories/better-classroom-audio-conferencing-leads-to-greater-engagement-and-fewer-fires